This is the best beach in Indonesia according to the Traveler Choice of Tripadvisor in 2015 (one of the reason because it’s the cleanest) that is located in Nusa Dua area and managed by the ITDC (Indonesia Tourism Development Corporation). It has white sand and calm sea water, very suitable for swimming, especially when you are having a family holiday with young children or just want to enjoy the beautiful view.

We went there last week. Actually, our main purpose was not the beach, but to see Ami (my second daughter) performed Kecak dance with her extra-curricular friends in a hotel yard near this lovely beach.

So, before, the Kecak dance was started, I took Andra (the first one) to the beach. She was surprised and said this is so beautiful. She’s 13 years old and this is her first time to visit this wonderful spot, here in Bali (forgive me, sweety, for being such a selfish parent, did not bring you to this beach since years ago). She kept telling me, I love Nusa Dua, Bu. I Love Nusa Dua. It’s clean, beautiful, and the sea water is very inviting (I’m not in doing any Bali Island tourism promotion, really, it was purely my daughter’s words towards the beach).

And she asked me, are there no houses in Nusa Dua? I replied that as far as I know, Nusa Dua is an exclusively managed area for 5 stars hotels that are located around the beach, this area was started by the government since 1970-s. So, probably you won’t find any houses in Nusa Dua area. Nusa Dua itself means the Two Islands (Nusa means Island and Dua means Two), located in the southern part of Bali Island, 20 minutes from the Ngurah Rai airport and about 45 minutes from Denpasar.

And I can tell you, my dear blog readers, Nusa Dua beach is a very suitable place to get rid of your stress and enjoy refreshing moment from your boring daily routine. 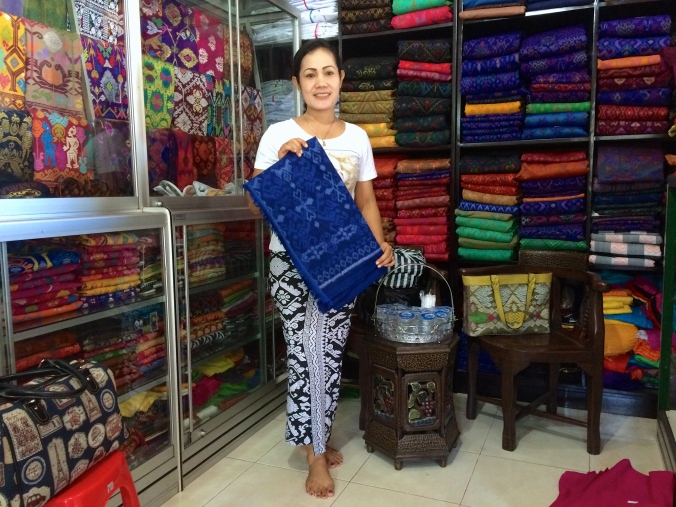 Ketut Sriani, the owner of Sri Widhi endek workshop with piles of her handmade collections.

Note: before I made the title of this post, I had searched, what is the difference between fabric and cloth. I found the use of these words are similar and are often used interchangeably. So, I chose as you can read title for this post (a-not-so-important-information-but-still-I-want-to-tell-you-because-I-just-want-to).

Weaving the threads into piece of delicate beauty

A few days ago, we went to Klungkung regency, one of the 8 other regencies in Bali province to buy some endek: the traditional woven Balinese cloth. Next week, on 11th June there will be the opening ceremony for the 38th Bali Arts Fetsival 2016. I will be the Master of Ceremony (and also the commentator) for the official ceremony of the parade, so I want to wear something special for this major arts and cultural event that will be attended by local, national and international audiences. This opening ceremony is opened for public where they can see an arts and cultural processions, this year (2016) are presented by the 8 regencies and Denpasar city, other provinces in Indonesia, and two foreign guests (France and India participants). 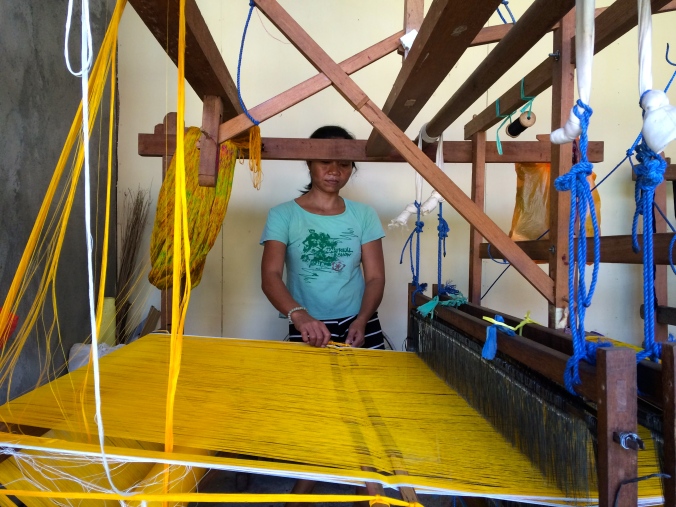 Back to Klungkung, actually, it is not the only regencies and city in Bali that produce endek. Each of them has their own style and beauty of this woven cloth. I chose Klungkung, because my colleague said that she knew a store has its own endek workshop with traditional Balinese loom! I have planned for a while about introducing endek as one of the Balinese style of cloth to my readers. The Balinese people usually used it for kamen (to wrap around your lower part of body) combined with kebaya, blouse, or shirts (for the gentlemen), schools or office uniform, traditional (both religious or non-religious) ceremonies and other special occasions. 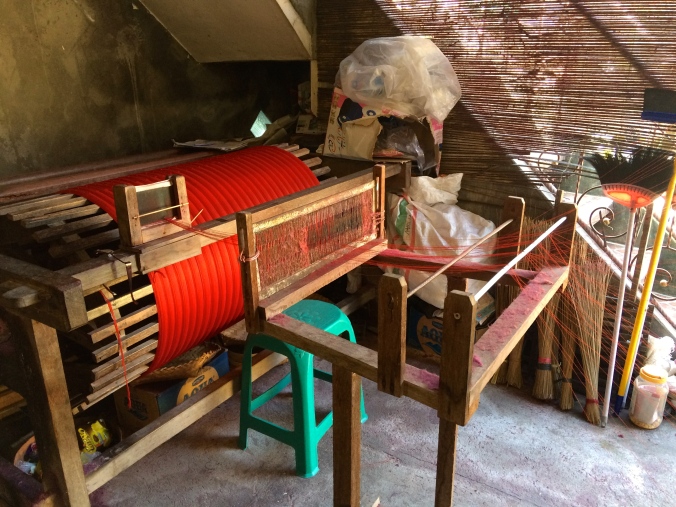 So, we went to Semarapura, the capital city of Klungkung regency, took about half an hour from Denpasar by Ida Bagus Mantra bypass. This small workshop was started in 2009 and are frequently invited to join exhibitions, including the Bali Arts Festival exhibition, located at the Arts Centre (Tamana Budaya) of Denpasar. Although it is quite small but loaded with kind of endek clothes, cotton thread and silk thread, cheap endek and exclusive ones. I asked for the latest version of Mastuli and Ketut Sriani (the owner) shown this beautiful cloth, named kristik Mastuli. Kristik probably derived from the words of Cross Stitch (Distance from England to Indonesia, need thousands miles, no wonder the words of Cross Stitch mutated into an almost unrecognisable one: kristik…) and it does not even involve any skills of cross stitching, but weaving threads. I think, it is the flowers motives are inspired from structure of cross stitch. Meanwhile Mastuli refers to the thread material used that is silk. 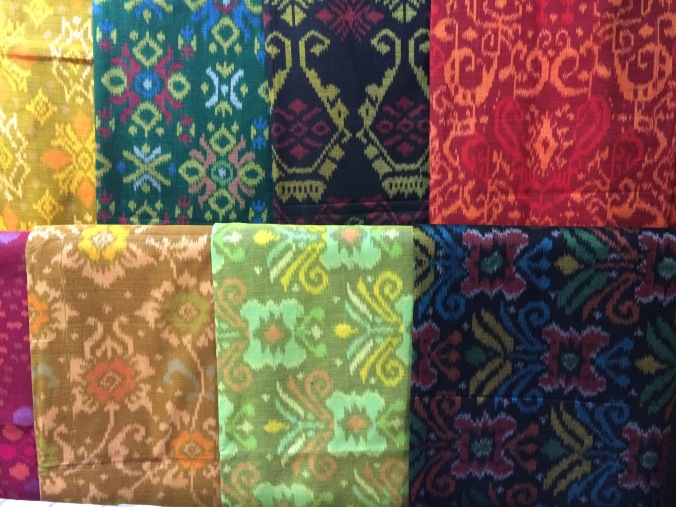 Balinese motives: what can I say more, beautiful, elegant and unique! 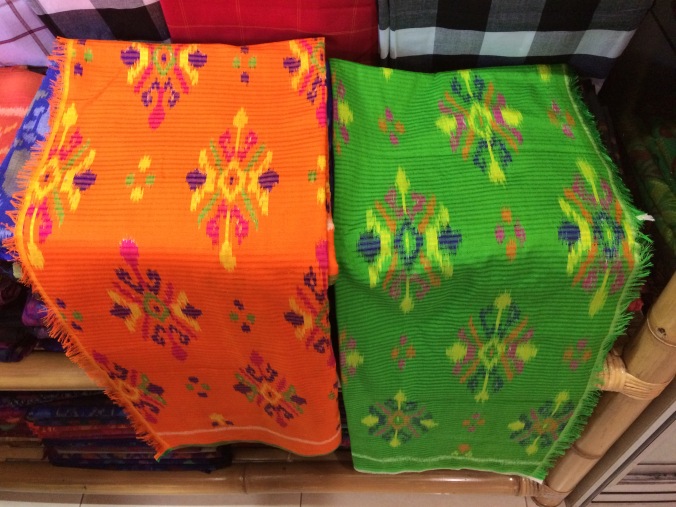 The Endek Mastuli: the delicate allure

From the very beginning (dye the white silk thread with colours) to a piece of beauty, Endek Mastuli needs 1 month and a half. Its price is more expensive than the cotton thread. But, I can tell you, if you buy something from the source, like endek workshop or manufacture you will get first price that is cheaper than the market, city boutiques or those small shops around your hotel. The uniqueness of Mastuli, it always has brilliant colour, but still elegant, light, soft, good to be worn if you want to catch some attention from others.

My chosen Mastuli: still woven in the loom!

I chose the golden one and decorated with colourful flowers that is still weaved in the loom. Ketut said in the next 2 days, this cloth would be finished.  So, I can say  I will wear a delicate allure that is fresh from the loom!

I see you have snack.

To try bottle hand painting has been on my ‘want to do something new list’. Why is that? I don’t know. I’m not sure. May be because we have a lot of used bottle, may be I just want to spare my weekend with something fun. END_OF_DOCUMENT_TOKEN_TO_BE_REPLACED

We all have things we need to do to keep an even keel — blogging, exercising, reading, cooking. What’s yours? 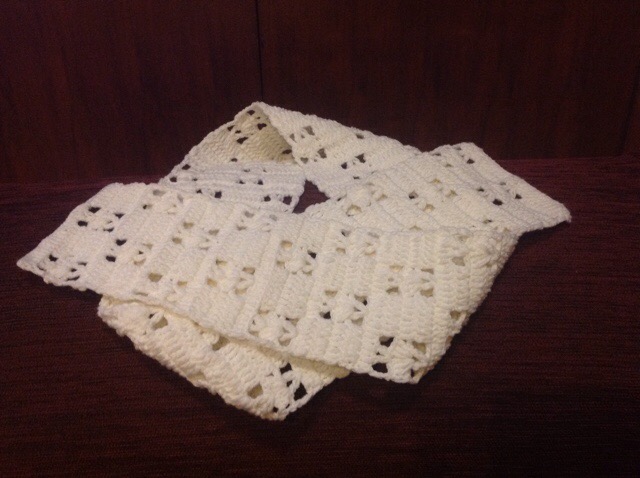 Keep an even keel. When I read that idiom, I absolutely had no idea what did it mean. Actually, it is about how to keep something in a steady state. In this situation, let’s say my mind. END_OF_DOCUMENT_TOKEN_TO_BE_REPLACED

I read that line frequently in the fairy stories that are translated into bahasa Indonesia into mereka hidup bahagia selamanya. I did believed that line when I was a little girl. END_OF_DOCUMENT_TOKEN_TO_BE_REPLACED

Write an information about tourist object under 100K (about US$ 10). I like this challenge and got this place right away in my head. It is called Puputan Badung park with its icon a monument of Denpasar people fight the Dutch. No heart feeling. END_OF_DOCUMENT_TOKEN_TO_BE_REPLACED

I took this picture a couple weeks ago. When we were visiting my hometown in Gianyar regency, about an hour to the east. As we were waiting for the time for prayer, I and my younger daughter Amy, walked around the family temple (merajan) and saw some twisted tree trunk in the yard surround. END_OF_DOCUMENT_TOKEN_TO_BE_REPLACED 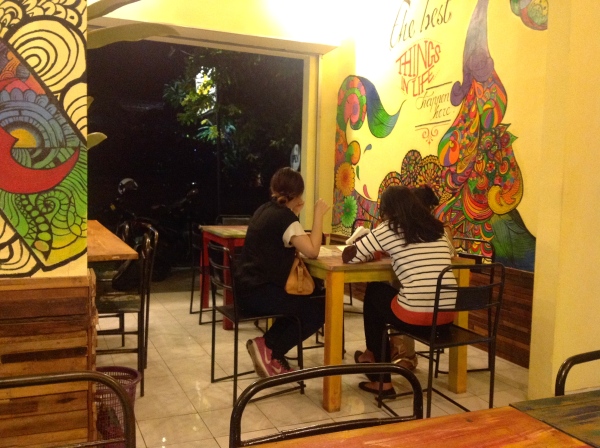 I’ve made a major decision few months ago. Using almost all of my money saving, I try to run MiniMaca (a mini mart and café). That the fact I am a language graduate and work already as a civil servant What those facts actually do to my new ambition? What past experience has influenced that big choice? END_OF_DOCUMENT_TOKEN_TO_BE_REPLACED

Congklak. Made of wood with two dragon heads.

Let’s talk about games of our childhood.

First, I will tell you games in my childhood time, in 1980-s that was spent in Kendari, South East Sulawesi. It means a lot of playing outside. END_OF_DOCUMENT_TOKEN_TO_BE_REPLACED